One of the things that I noticed about doing the drawing in the previous post, "Rocks and Rolling Water" was the limits that paper put on the quality of line. I used a medium surface drawing paper, Strathmore 400 series. When I started it. it was a partial sheet and I was doing it mostly to practice. Then I got sucked in and finished it. Had I known how far I was gonna take it, I might have used different paper. But, no matter.  It's good paper with a warm color. I think the problem I was having with it was the amount of detail I was trying to pack into such a small size. I'll be the first to admit I don't know all there is about the paper, having spent most of my time in other mediums. But doing is a great teacher, better then having someone tell you what to use.
I like small detail. I like working small. I work with pencils sharpened to a fine point most of the time. I discovered that the medium surface was so rough that my nice needle point was being worn down very quickly and I was frequently repointing with a sandpaper block. The rough surface tended to turn my nice smooth line into a bit of a fuzzy edge. Ok, maybe I am getting a bit too obsessed here. You probably get the idea.
So the next drawing was to be a simular scene but I wanted more detail and developed gradients. I needed a different surface, something smoother. And matte size being an issue on the previous drawing, that detail would be needed to be addressed first. I chose Bristol with a smooth finish and sheared it to a size closer to the matte size with just a small margin. 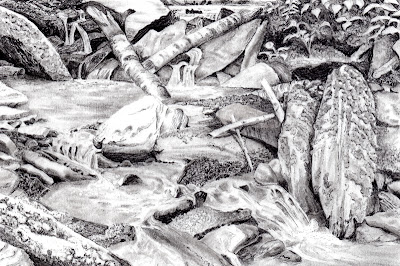 Compare this to the drawing in the previous post. More grays, more gradients, smaller details, richer textures. The paper was not as warm but that's fine. Both works are close to the same size. Still done almost exclusively with #2 pencil. The problem I was talking about here with the quality of the paper surface is pretty much solved. The 400 series paper gave me a base amount of texture, below which it was difficult to draw. The Bristol smooth finish allows much smoother strokes and the possibility of drawing in a wider variety of textures.

Ok, this is a blog and not a book. Sorry about going on and on about it. I will probably revisit the subject another time.
Posted by Robin Cruz McGee at 11:07 AM